It seemed as if the dishwasher was stuck in the following loop:

I discovered that the problem doesn’t occur if I select the “precleaning” program (the short program where the dishes are only washed with cold water). This was a point to start the investigation. I took the front panel apart to get to the electronics inside and do some measurements. 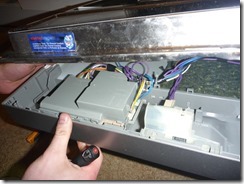 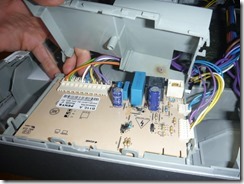 To remove the front, open the dishwasher and undo the screws that are on the inside of the front door. The two screws in the middle hold the wood faceplate. You don’t need to take the faceplate off, but It makes the handling a bit easier (however to mount it back on it is good to have someone that helps you).

When you have removed all the screws, the front will split into two parts. The electronic is positioned at the front left corner (where the buttons are). It is enclosed in a separate plastic case that you can flip open after you remove the cables.

When you look on the second picture you may already can spot that there are some burning marks on the backside of the plastic cover right where the relay sits.

When I inspected the PCB closer, I saw that the relay, that switches the heating element, had a hole in it. Yes, a hole! 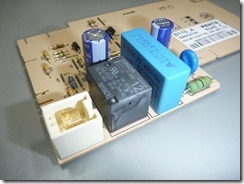 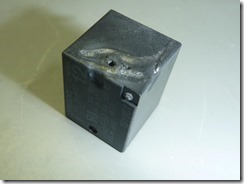 I have no idea what can cause a relay to look like this. I measured the heating element and the resistance was fine. So I went ahead and replaced the relay … but that didn’t solve the initial problem. The dishwasher still switched itself off.

After some further measurements I found that the real cause of the problem was the power supply. This dishwasher uses a capacitive power supply (Wikipedia: https://en.wikipedia.org/wiki/Capacitive_power_supply). With the LCR meter it was quite easy to find that the 1µF capacitor had died. I think this is a little design flaw. Because of the placement of the control circuit, the capacitor is exposed to the inside temperature of the dishwasher (~ 65°C when the dishwasher is working). There is hardly any thermal insulation present. Fore sure this has reduced the lifetime of the capacitor significantly. 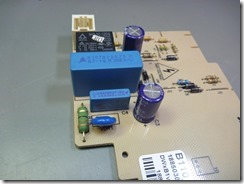 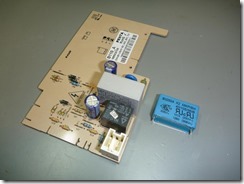 So the only thing to do was to replace the bad capacitor and everything was working again perfectly.

For all of you that don’t want to repair the control board yourself: You can also buy the whole board as a spare part and replace it (no soldering needed). The following search terms may help you in finding the correct replacement:
Product code: 7604683742 / Replacement part code: 1885030105